As he deals with major abdominal emergencies in his NHS practice, he is experienced in dealing with parastomal hernia and stoma reversals, like Hartmann's reversals after an emergency sigmoid colectomy.

Mr Watfah studied at the University of Innsbruck in Austria where he became a Doctor of Medicine with an MD in 2000. He finished his surgical training in 2011 with a subspecialty degree in visceral surgery. He spent almost three years at the Paracelsus Medical University in Salzburg, Austria at the Department of Visceral Surgery as a consultant in the colorectal unit before moving to the UK. At this unit, he ran colorectal cancer and inflammatory bowel disease services.

In 2010/2011 he was awarded a fellowship to work at the prestigious St.Marks hospital, where he worked for Prof. Robin Phillips and gained significant experience in fistula and coloproctology surgery and then continued working for Miss Carolynne Vaizey and Mr Janindra Warusavitarne, who have their interest in intestinal failure surgery and IBD surgery respectively, as an RSO (Resident Surgical Officer).

Since 2014, Mr Watfah is holding a general surgeon consultant position at Northwick Park Hospital/St Mark’s Hospital with a special interest in emergency general and colorectal surgery, including open and laparoscopic surgery.

Currently, he is also the Honorary Secretary of the Section of Surgery at the RSM - Royal Society of Medicine, where is he part of the Council of the Section and involved in planning and holding educational meetings and webinars within the RSM.

Mr Watfah is actively involved in teaching and has a high interest in training. He is an examiner on PACES (Final year student exams), an Interview Panel Member for Core Trainees (CT) and for Higher surgical training (HST) for the London Deanery and a CCrISP (Care of the Critically Ill Surgical Patients) course faculty member for the RCS (Royal College of Surgeons). He is an Educational and Clinical Supervisor for junior trainees at London Northwest University Healthcare NHS Trust and is also as trainer acknowledged by the GMC (General Medical Council). He is actively involved in clinical governance.

He is the clinical lead for SAU (the surgical assessment unit) at Northwick Park Hospital and the local lead for nationwide trials (currently the DAMASCUS trial for diverticulitis treatment). Over the years, Mr Watfah has been invited as a speaker to international meetings to talk about coloproctology disorders and emergency abdominal surgery.
Read more 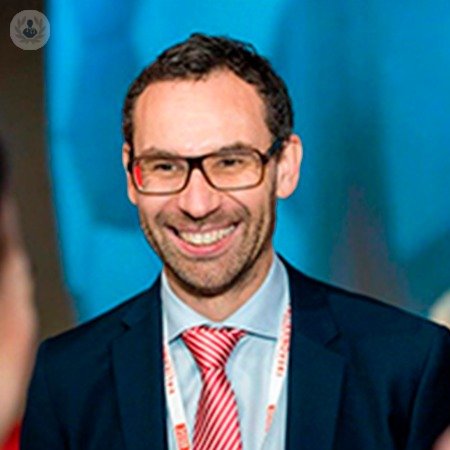 What is an inguinal hernia? A hernia occurs when part of the internal organs or tissue pushes thro...

He was generous with his time and explained and examined thoroughly. He is excellent!

Any cookies that may not be particularly necessary for the website to function and is used specifically to collect user personal data via analytics, ads, other embedded contents are termed as non-necessary cookies. It is mandatory to procure user consent prior to running these cookies on your website.