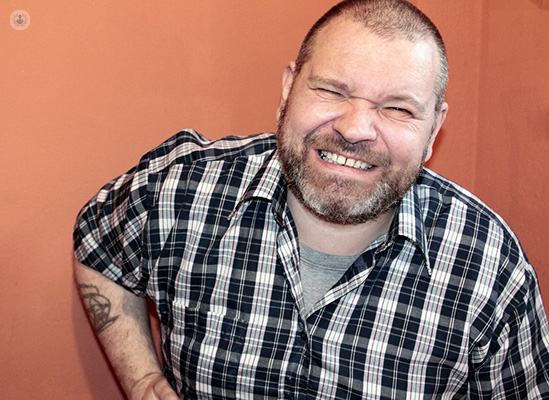 What is an incisional hernia?

An incisional hernia is a type of hernia where tissue protrudes through an incision made during previous surgery that hasn’t fully healed. It can occur as a complication from abdominal surgery and is more likely to occur following emergency surgery. The herniated tissue may be part of the intestine, part of another organ in the abdomen, or other abdominal tissue.

What are the symptoms of an incisional hernia?

Although hernias can appear unsightly, often they won’t produce any problems. However, if they become larger, they can become problematic, increasing the risk of complications such as strangulation to the affected tissue.

The main symptom is a lump or bulge in the abdomen close to the site of the surgical incision. Pain is also common, which is often worse while upright and relieved when lying down. Another risk of having an incisional hernia is bowel obstruction in which can result in nausea and pain.

Typical symptoms of incisional hernias include:

What causes an incisional hernia?

Incisional hernias occur following surgery. The surgical incision causes a weakness in the abdominal muscle, through which tissue can herniate if put under pressure. This pressure may be due to the patient engaging in physical activity too soon after the operation, gaining weight rapidly, or becoming pregnant.

What is the treatment for an incisional hernia?

Treatment for an incisional hernia is usually further surgery. This can be performed either as open surgery or laparoscopically. They hernia will be pushed back in and the weakened area of the abdominal wall will be strengthened, sometimes with mesh.

Any cookies that may not be particularly necessary for the website to function and is used specifically to collect user personal data via analytics, ads, other embedded contents are termed as non-necessary cookies. It is mandatory to procure user consent prior to running these cookies on your website.